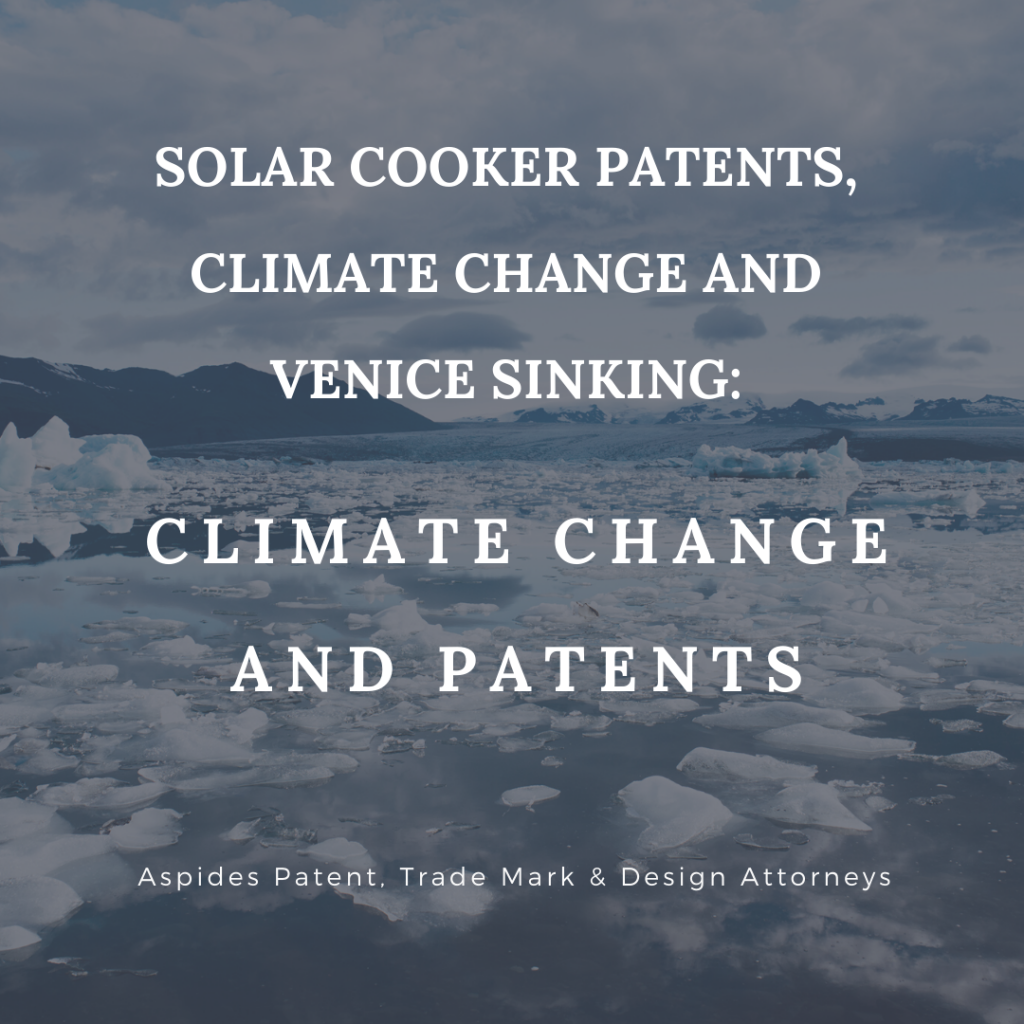 Invariably this leads to a preamble discussion in the patent specification of climate change, global warming and the effects which gave rise to these inventions. Conveniently, from a drafting viewpoint, this results in the discussion of the Background Art being substantially similar in most specifications.

In all honesty, how many different ways can a patent attorney present the ubiquitous problem of global warming and climate change?

Patent attorneys are either science or engineering graduates who have a natural technical curiosity. While there are some things which are axiomatic in science, engineering and climate science. However, ‘climate change’ is certainly one topic which is still to be settled by academics.

As with politics or religion, patent attorneys do not usually question or discuss the subject of climate change with their clients. It almost falls into the same category as the perpetual motion machine. You either believe that it works or you don’t, but you represent the inventor regardless.

In view of claims that smaller Pacific nations (and Venice) sinking due to the rising sea levels caused by global warming and the recent spike of environmental protesters, I was inspired to look more closely at climate change on the internet.

I decided to take the less arduous route of downloading images (plotted graphs) of climate studies, which I thought made a definitive finding. Naturally, I also had to read the accompanying articles for a greater explanation of the graphs I thought relevant.

From the graphs, I considered the relationship between the earth’s temperature and the level of atmospheric CO2. This study looked at Antarctic ice core samples of some 3,300 meters in depth. (simply Google “Vostok ice cores”). The graphs show a regular ragged-tooth pattern with coincidental peaks and troughs of temperature and CO2 levels every 100,000 years spanning over the last 450,000 years. This indicates (to me) that both the earth’s temperature and CO2 levels are causative, if not directly related to each other with the troughs in temperature representing the numerous ice ages.

But what about man’s contribution to atmospheric CO2 levels, global warming and climate change?

If man has been around for all that time then surely we can attribute the peaks or rises in CO2 (and temperature) to human activity. Human activity, however, cannot explain the temperature falls or troughs i.e. the ice ages. Were these also caused by humans?

I find this question perplexing as man’s agricultural and industrial activities of significance can only be attributed to the last 5000 or so years. Yet we are looking at a regular and systematic climate change effect on a significant scale occurring every 100,000 odd years for the last 450,000 years!

I then had a brainwave of asking if man’s current footprint on the earth i.e. the global population had any relation to atmospheric CO2 levels. To my great surprise, the graph of Atmospheric CO2 Concentration vs. World Population had a correlation coefficient of R2 = 0.999.

So what does this all mean?

An adult breathing normally produces roughly a litre of CO2 every 4 minutes. An absurd but simple proposition. If we do not wish CO2 levels to keep rising we just have to reduce the human population. Obviously, culling humans is not a practical solution. Perhaps we could reduce the population by birth control or starting wars? But is there really a problem that needs to be solved?

I wondered where all the CO2 produced goes. Simple answer again. Just ‘Google it’ and the ocean CO2/O2 biofeedback cycle pops up. Phytoplankton in the sea swaps CO2 for O2 in photosynthesis just as plants do on land. Simplistically, the more atmospheric CO2, the warmer the earth’s temperature, the more ice melts thereby making more sea to absorb CO2. More phytoplankton photosynthesis causes more oceanic CO2 to be adsorbed. As atmospheric CO2 levels drop and as the algal blooms fall to the ocean floor, the global temperature starts to drop and more ice begins to form and the sea level adjusts accordingly.

This feedback system appears to have been happening for at least 450,000 years from the Vostok ice core data.

Is this climate change?

We could call it that. But it is on a massively grand scale which occurs at approximately 100,000 year intervals.

📲 Feel free to contact Aspides for further information on our Patent costs and services and what areas of your business need to be assessed.

In the late 1990s, Rolls Royce Motor Cars Ltd, the manufacturer of…

Nirvana sues Marc Jacobs for copyright infringement: But what constitutes as sufficiently or substantially similar?

Nirvana sues Marc Jacobs for copyright infringement: But what constitutes as sufficiently…