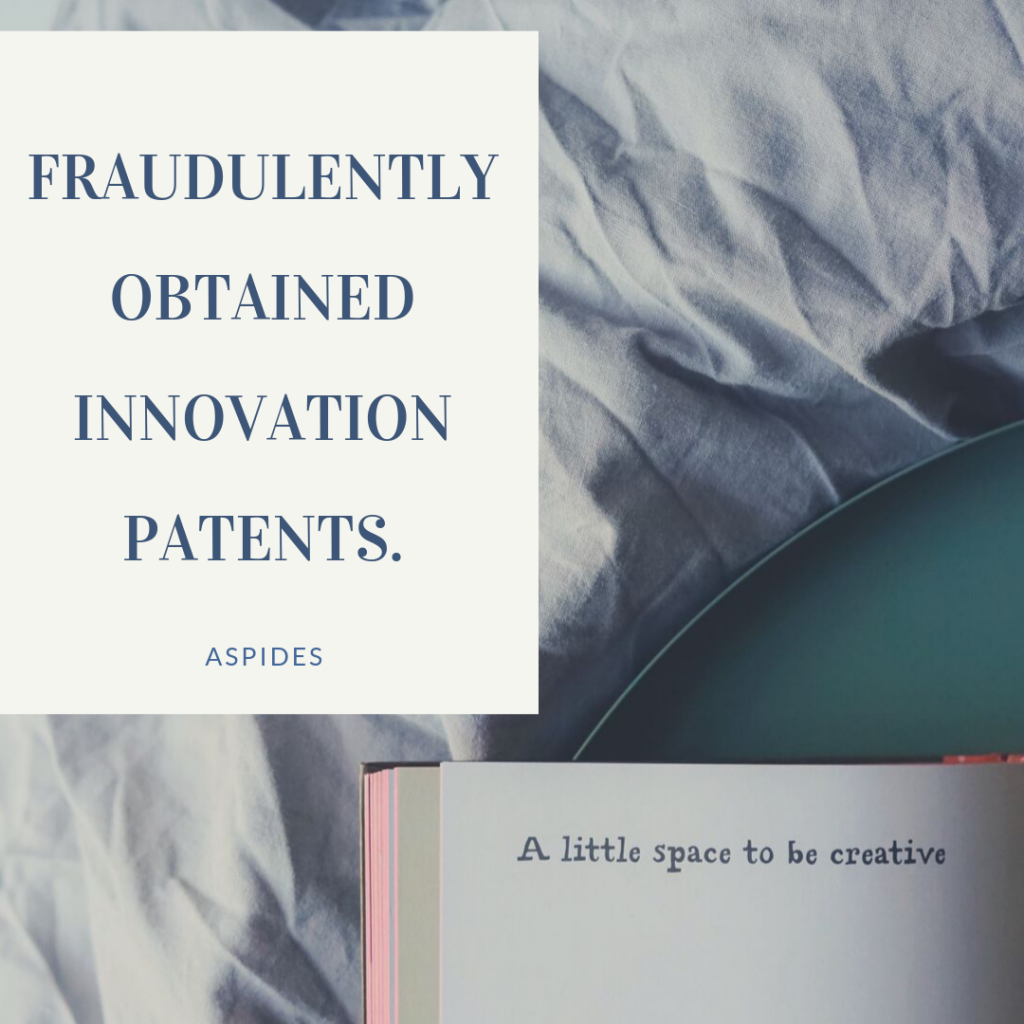 Can an Innovation Patent be Fraudulent?

One of the concerns of being a patent attorney is that you have to constantly emphasize to your clients that they must be completely truthful when they are briefing you.

Patents (and Registered Designs) rely on claimed priority dates, that is, the date on which an application disclosing the invention (or design) is officially and validly filed in a recognized patent office from which a priority date for any further application will be established.

In addition, the true inventor (or author of the design) must be correctly identified on the priority generating application for it to be validly filed.

If one or both of these conditions are misrepresented, any patent (or design registration) which issues with a falsely claimed priority date or designates an untrue inventor (or designer) will be considered void ab initio and thus unenforceable.

To give a practical example, I was recently engaged by clients who were rightfully concerned that a product they were importing from an overseas supplier could be the subject of a recently certified and therefore effectively enforceable innovation patent.

A search of the IP Australia patent database, AUSPAT confirmed this to be the case. My clients’ own enquiries of their supplier also revealed some interesting information. The supplier advised them that it was he who had in fact invented the product and had been supplying it to customers in Australia and elsewhere before the claimed priority date (evidence of which will, of course, have to be provided).

The supplier had also directed my clients to an overseas website that had been marketing the product on a date earlier than the priority date claimed in the patent.

What this indicated is that neither the priority date nor the inventorship claimed by the innovation patent was true. The innovation patent had not only been invalid at lodgment but also therefore examined and certified invalidly. It also suggested the patent attorneys who initially filed the application were either complicit in the matter or, as I strongly suspect, were in all probability unaware of the factual circumstances and were merely following their client’s instructions.

In the same vein, I can personally attest to lodging a patent application for a client who claimed to have invented a device which he did not disclose to me he had seen overseas. The client had declined my advice on an optional patent search prior to lodging the patent application. Unlike examination of innovation patents which are optional (but necessary if the right to enforce them is required), this was an application for a standard patent where examination is a mandatory procedure.

In the ensuing examination process, the examiner reported the exact same device which was patented overseas. Understandably, my client did not wish to discuss the matter further after I forwarded the examination report to him.

While Section 28 of the Patents Act 1990 allows for notice of matters affecting the validity of innovation patents to be provided to IP Australia, my present clients were technically out of time to avail themselves of this provision. The innovation patent had already undergone examination, was certified and in effect enforceable by the alleged patentee.

It was unfortunate IP Australia’s initial examination of this innovation patent did not extend far enough to capture the internet information which my clients were able to access. Importantly, it shows how patents can easily be obtained by unscrupulous “patentees” misrepresenting themselves as inventors as well as claiming false priority dates.

The ways a certified innovation patent can be challenged on any grounds of invalidity include:

(a) A formal application for the innovation patent to be reexamined accompanied by evidence. (This will require strong written evidence if inventorship and/or prior disclosure evidence is to be submitted).

(b) In the absence of a formal request for re-examination and at the discretion of the patent office by a submission of invalidating material. (The material should be able to be readily accessed and available in the public domain.)

(c) As a Defense in full court proceedings in an action for infringement brought on behalf of the patentee.

At this stage, while aware of these options, my clients have however decided not to pursue the matter further. A close analysis of the wording also finds they do not actually infringe any of the patent claims.

In any event, my clients have the comfort of knowing they have a number of defenses against any letter of Demand or action for patent infringement issued on behalf of the fraudulent patentee. To my mind, it should also be a matter of some concern for the patent attorneys who were initially instructed to lodge the offending application. As previously discussed, I believe they were not apprised of the facts and were merely following their client’s instructions. There are statutory and serious penalties for fraudulent misrepresentation before the patent office.

Did you know your most valuable marketing tool can be your trademark?

Put the ® on your Brand! Your trademark, often known as a…

Naturally, patent attorneys often get asked how much drafting a patent application…