The Auld Mug, the New York Yacht Club and the absent US Patent Attorney. 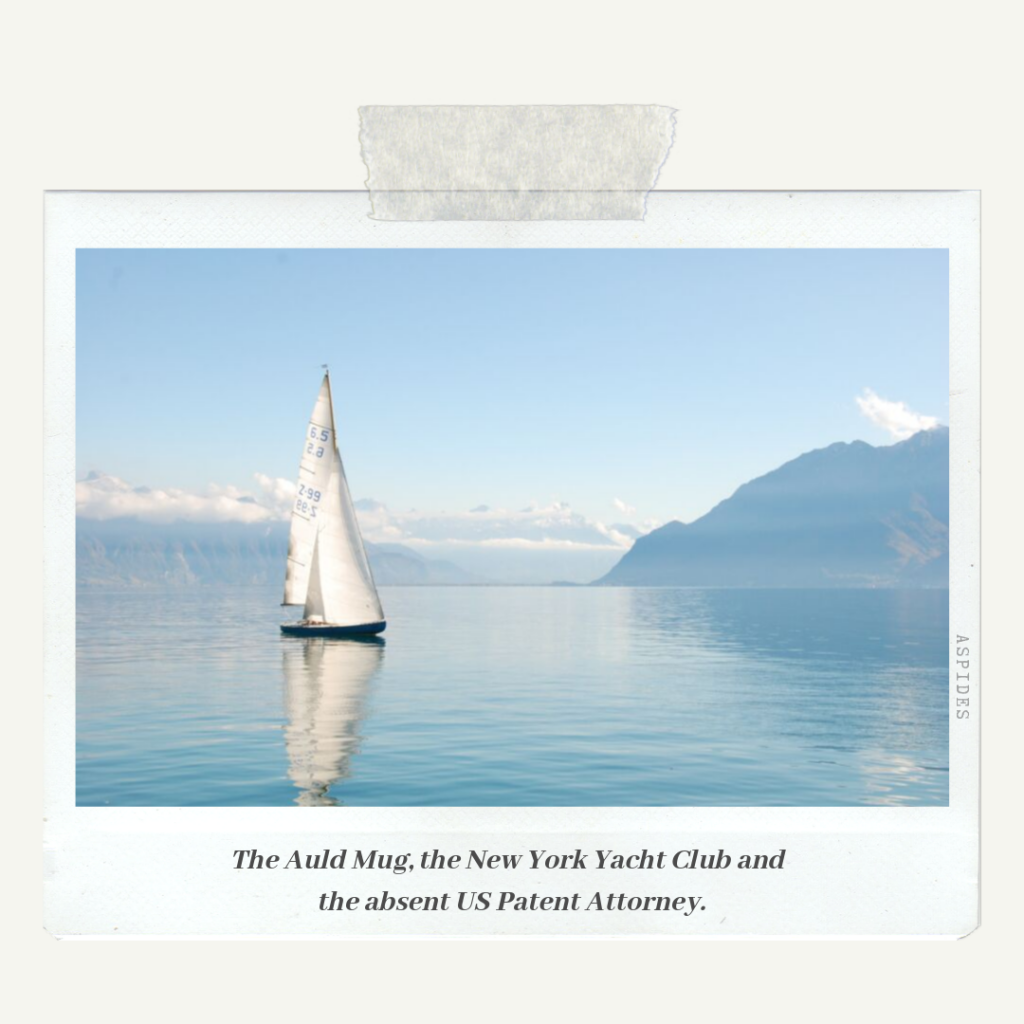 Can anyone ever forget the 1983 America’s Cup yacht race and the controversy which surrounded it? Or the “public holiday”  granted by one, Robert J Hawke, Prime Minister of Australia?

Certainly, I cannot. At the time I was for sport, sailing a Laser class dinghy at the Brisbane Yacht Club on the Bulimba Reach of the Brisbane River.

I remember clearly how our challenger, Australia II, designed by Ben Lexcen and skippered by John Bertrand coming from behind and, at the twelfth hour, defeating the American defender, Liberty skippered by Dennis Conner. Ben Lexcen, or as he was once known as Bob Miller was a boat designer who worked at a sail loft and did a lot of his dinghy testing on the Brisbane River.

This resulted in lifting the Americas Cup trophy from its place at the New York Yacht Club after 132 years. It would not be an exaggeration that the resultant hue and cry and gnashing of teeth could be heard in every yacht club on the US east and west coast.

The subject of numerous and spurious objections by the New York Yacht Club, Australia II was considered a radical 12 metre having a ‘winged’ keel which allowed her to point higher upwind with reduced leeward displacement and increased stability. The keel also had an innovative ‘upside-down’ configuration in being wider at its tip than where it is attached to the hull.

Her mystery (and mythology) was further fuelled by the press when Australia II arrived at Newport, USA with a magician’s shroud shielding her keel from view. This brilliant showmanship conjured purely for the American public’s consumption before she was tantalisingly lowered into the water. I recall this really spooked the Americans who engaged scuba divers ( and it is alleged, miniature submarines) in the attempt to ‘spy’ on the keel from an underwater vantage point.

The New Yacht Club must not have had any patent attorneys in its membership. Although not being one myself at the time, I also understand that perhaps the profession in the US was not of the ilk or sort to afford the exclusive membership dues of the premier sailing club at the time, possibly of the world.

More the shame really, as the Australian patent application for the winged keel (1982085668) was open to public inspection at the Australia Patent Office (OPI date 11 August 1983) a full month before the regatta began (14-16 September 1983). In fact, it was also available for public inspection at the Netherlands Patent Office where it was first filed.

An Australian patent attorney could have easily revealed the document but would, of course, have had to bear the ensuing public wrath and ignominy of having assisted the enemy at a crucial time. Certainly, any American or Dutch attorney worth their salt could have easily unearthed the patent document.

Like the Bledisloe Cup of Rugby, Australia has not won another Americas Cup since 1987 when the US challenger, once again skippered by Dennis Conner resoundingly and pointedly, beat Australia 4-0.

Under American sailing lore( and perhaps law), the ‘Auld Mug’, or more correctly, the Louis Vuitton Cup, has thankfully been returned and restored to its rightful and spiritual place, namely, the hallowed halls of the New York Yacht Club.

📲 Feel free to contact Aspides for further information on Intellectual Property Protection and what areas of your business need to be assessed. Want to keep up to date with local legal news? Head back to our blog hub or check us out on our social platforms: Facebook.

0 Comments on "The Auld Mug, the New York Yacht Club and the absent US Patent Attorney."